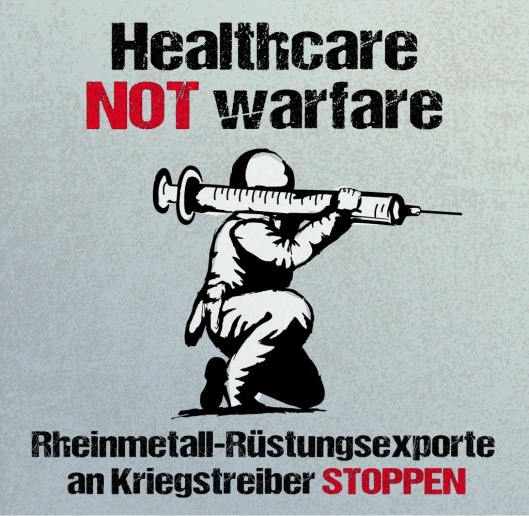 The International Peace Bureau would like to introduce the First Youth Summit Against NATO.
Information and registration here

International protest against militarism and war the 30th April!
the 30th April at 2:30pm a 24h bicycle marathon will start in Ramstein air base.

As part of GCOMS More than 150 events and actions in more than 30 countries will protest against the unchecked rearmament. $ 2 trillion a year for armaments, drones, tanks and military bases, and at the same time millions of children are starving, health systems are ailing and schools are in ruins. The no to war and armaments connects these actions.

So we will be connected live in solidarity with the anti-base activists in Okinawa and South Korea during our marathon. We will meet some of you again at the anti-military baskets congress in Kaiserslautern on July 8/9, 2021.

A German-speaking webinar on military expenditure in Germany specifically

The Center for Feminist Foreign Policy shared the GDAMS infographic ‘Healthcare Not Warfare’ on their social media (@feministfp)
“We need fewer soldiers, jets, tanks and aircraft carriers and more doctors, ambulances and hospitals.”

“NO TO VIOLENCE. YES TO A CULTURE OF PEACE.
75 years after the end of the Second World War, peace is once again under threat. Even here in Europe it is fragile. Many things have grown uncertain and global threats have been exacerbated.

Those who want peace must fight for peace. The frequently heard demand that Europe learn the ‘language of power’ (Munich Security Conference) and develop its military capabilities is wrong. Further militarization will not solve any of our problems. Rather, we need to bring social, ecological and economic conflicts back into the civil sphere. Otherwise the ghosts of the past will return, bringing only death and destruction. A new arms race is already in full swing.

We say no to a language of violence, and yes to a culture of peace, reason and understanding.
We say no to an increase in military spending! We say yes to disarmament instead of rearmament! Yes to a new policy of détente now!”

The Opportunity Costs of Military Spending: How and Why it’s Time to Rethink Our Priorities

As part of the Global Days of Action on Military Spending (GDAMS) 2020, IPB will host a webinar for students and young professionals interested in learning more about how military expenditures weigh up against social spending on issues such as combating climate change, improving infrastructure, and investing in education. The webinar will commence with a overview of worldwide and country-specific military spending based on available data from SIPRI and other reliable sources. Subsequently, the group will look at the figures for spending on various social programs.

In addition to presenting a review of military and social spending, the webinar will lay out practical methods and procedures of demilitarization and disarmament at a governmental level as well as how individuals can engage others in the conversation to produce societal change and pressure on national governments. Participants will be given the opportunity to brainstorm and share their ideas with each other and the IPB team and explore how they can best use their skills to engage in the conversation about disarmament and demilitarization.

The event will be held online and is open to 20-25 participants who are students or young professionals in the field. Data will be presented by Reiner Braun, Executive Director of IPB, and Amela Skiljan, IPB Coordinator, and discussion will be led by IPB Interns Eskil Grav and Sean Conner. Those interested can register for free by sending an email to info@ipb-office.berlin with their name and profession or area of study.

Press Conference at the IPB Conference Room, presenting the GCOMS Statement on global military spending, with SIPRI data and GDAMS message at the center. The Berlin press conference was held in the IPB headquarter and involved the co-president of the IPB Reiner Braun. During the Press Conference, Reiner Braun presented the appeal Disarm! Don’t arm!, whose signatories are, among others, Noam Chomsky, Mairead Maguire, Samir Amin or Federico Mayor Zaragoza. It was participated also by Antje Heider-Rottwilm, Church and Peace e.V, Michael Bloss from the German Green Party, Marco Bülow, member of the German Parliament for the Green Party and Kathrin Vogler, MP for Die Linke party.

Selfies from activists from the Center of Feminist Foreign Policy (CFFP). https://twitter.com/feministfp – Look at the photos here and here!

During GDAMS, the German peace tax group (Netzwerk Friedenssteuer e.V.) is encouraging its members to undertake a minor, very specifically German activity: to write letters to their respective tax offices, in which they explain why they are sending €4.30. They link this symbolic payment (the strange amount is explained in the text which follows) with a heartfelt plea to the tax office to find a way in which they can maintain their freedom of conscience when paying taxes, and also asking the tax office to support the political struggle towards legislation allowing tax payers to elect to have their money used for civilian purposes only (Zivilsteuergesetz). Read the English translation of the letter to the tax office and the two-page flyer

Kathrin Vogler likes to support the “Global Day(s) of Action on Military Spending (GDAMS)” of the International Peace Bureau! See her selfie here – Kathrin is Member of German Bundestag (The Left Party) and Spokeswoman for Peace Policy and Non-violent Conflict Resolutions.

Berlin: Press conference held on 24 April, as a contribution to GDAMS

The International Association of Lawyers against Nuclear Arms (IALANA), the World Future Council, and the International Peace Bureau circulated an ‘Appeal to Members of the German Bundestag: Stop the new arms race – disarmament for a sustainable future!’

Press conference for GDAMS with Paul Walker with 4 camera teams, about 15 journalists.

IALANA organized a press conference on global arms spending with a focus on chemical weapons on April 14th in the context of GDAMS. They had invited to the conference, the winner of the Alternative Nobel Prize and chemical weapons expert Paul F. Walker, Member of Parliament of the party Die Linke Jan von Aken and Michael Kellner, federal secretary of the Greens, who were interviewed by media representatives.  Read here the complete interview.

International Network of Engineers and Scientists for Global Responsibility