Report by the Transnational Institute (TNI) 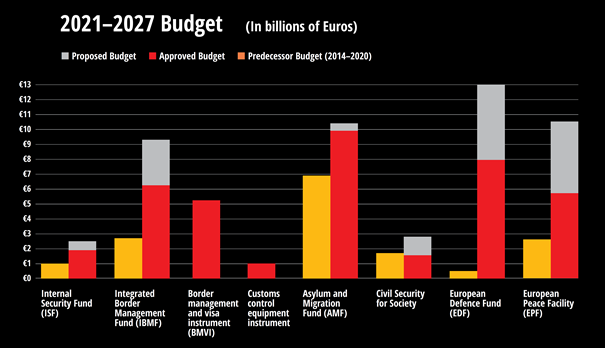 The Transnational Institute launched a report and online campaign denouncing the militarization of the EU.

“Long before the Ukraine war, the EU increased its security, defence and military budgets for 2021-2027 by a staggering 123% compared to the last budget round. EU funding for law enforcement, border control and military research, development, and operations (€43.9bn) is 31 times higher than funding for “rights, values and justice” (€1.4bn). The EU is increasingly prioritising a militarised approach to security: it started as a peace project, but these funds show a clear shift towards hard power, militarism and war mongering”.

The European Union’s 2021–27 budget allocates an unprecedented amount of European public money for security and defence purposes, more than doubling its budget from one spending cycle to the next, our new research finds. The overall amount of money earmarked for security and defence is €43.9 billion, an increase of more than 123% when compared to the previous seven-year budgetary cycle, which allocated €19.7 billion for the same purpose.

Development aid will be redirected towards border management and will play an increased role in enhancing non-EU states’ ability to control migratory movements. The massive increase in security spending will also strengthen ‘Fortress Europe’ and further the long-standing goal of the EU and its member states to externalise border control to third countries regardless of these policies’ devastating consequences. The objective of containing unwanted people fleeing war and persecution outside Europe’s borders has been strongly prioritised in the 2021–27 security and migration funds.

The European Defence Fund and the European Peace Facility mark a new point of departure for the EU in pivoting towards hard power and militarism.

Although the funding is being allocated for activities that carry significant risk, such as research into and development of lethal weapons, intrusive surveillance and policing, or the reinforcement of deadly border control practices, transparency, oversight, and accountability are all sorely lacking.