Join Lindsay Koshgarian of the Institute for Policy Studies and Bill Hartung of the Center for International Policy for the first of two national calls on Global Days of Action on Military Spending (GDAMS).

Lack of preparedness for the COVID-19 epidemic reveals the potentially grave consequences of slashing social safety net spending while deluging the military-industrial complex with our tax dollars. Trump and the Pentagon are pressing yet another massive increase in military spending. Critics from Washington think tanks working with the Poor People’s Campaign, reinforced by grassroots activists across the country are demanding that money be moved from wars and preparations for wars to addressing our urgent human needs: health, climate, housing, education and more.

GDAMS 2020 will take place from April 10 – May 9. We hope that you will consider organizing a local event. To help you prepare for this year’s GDAMS and for longer term efforts to change our national spending priorities, we have scheduled an inspiring briefing call featuring these two leading authorities on military spending and alternatives.

Lindsay Koshgarian: Lindsay’s work and commentary on the federal budget and military spending has appeared on NPR, the BBC, CNN, The Nation, U.S. News and World Report, and others. Now at the Institute for Policy Studies, her work is at the intersection of military and domestic federal spending. She got her start as a clinic worker and organizer at Planned Parenthood in central and suburban Philadelphia, and led economic development and affordable housing studies at the University of Massachusetts Donahue Institute prior to joining the National Priorities Project in 2014

Ruth Benn, of the National War Tax Resistance Coordinating Committee and the New York War Resisters League has prepared a fine short peace announcing this year’s Global Days of Action on Military Spending along with background about this U.S. and international campaign. Click here to read the article.

Click here to register for the March 19 briefing call 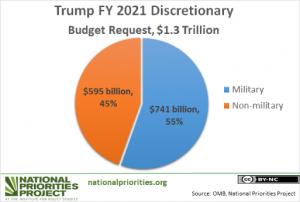