A new report by the Transnational Institute, in collaboration with Stop Wapenhandel and Tipping Point Noth South, and with GCOMS as a co-publisher, shows that military spending and arms sales have a deep and lasting impact on the capacity to address the climate crisis, let alone in a way that promotes justice. Every dollar spent on the military not only increases greenhouse gas (GHG) emissions, but also diverts financial resources, skills and attention away from tackling one of the greatest existential threats humanity has ever experienced.

As the world’s climate negotiators gather for their annual summit (COP27) in Egypt, military spending is unlikely to be on the official agenda. Yet, as this report shows, military spending and arms sales have a deep and lasting impact on the capacity to address the climate crisis, let alone in a way that promotes justice. Every dollar spent on the military not only increases greenhouse gas (GHG) emissions, but also diverts financial resources, skills and attention away from tackling one of the greatest existential threats humanity has ever experienced. Moreover, the steady increase in weapons and arms worldwide is also adding fuel to the climate fire, stoking violence and conflict, and compounding the suffering for those communities most vulnerable to climate breakdown.

The trajectory of military spending and GHG emissions are on the same steep upward curve. Global military spending has been rising since the late 1990s, surging since 2014 and reaching a record $2,000bn in 2021. Yet the same countries most responsible for large military expenditure are unable to find even a fraction of the resources or commitment to tackle global heating.

Our research reveals the following:

There is no evidence that the military can be green

The armed forces of the richest countries increasingly boast of their efforts to address climate change, pointing to the installation of solar panels on bases, preparation of sea-level defences, and replacement of fossil fuels in certain military hardware. A closer look, however, suggests this is more hype than substance:

Moreover, military alliances like NATO have been clear that they will not compromise military dominance in order to tackle climate change. Climate change, in different national security plans, remains as much a call for increased military spending to deal with this ‘threat’, rather than a challenge to reduce or rethink their operations.

Russia’s invasion of Ukraine in 2014, and especially the huge escalation since February 2022, has been used to approve major increases in military spending (and, therefore, GHG emissions), with no signs that either Russia or the 30-strong NATO alliance have even considered the climate impacts.

The arms industry has boomed from the global increases in military spending, as well as from diversifying into sectors such as border control and immigration management. The European Defence Agency (EDA) reported in 2021 that ‘the procurement of new equipment has benefitted most strongly from the overall increase in defence investments’ in recent years. After Russia’s full- scale invasion of Ukraine, and in particular the German announcement of €100bn extra spending, share prices of large arms companies have skyrocketed.

The richest countries are exporting arms to the most climate-vulnerable countries, fuelling conflict and war amid climate breakdown.

These arms exports not only divert money that is needed to instead mitigate and adapt to climate change, but also run the risk of fuelling conflicts, repression, and human rights abuses for populations on the frontlines of climate change. This is a form of climate maladaptation.

Egypt will host the UN climate talks, COP27, in November 2022, but it is much better known for its military spending than for its climate action.

Military spending could pay for a global Green New Deal

The richest countries have consistently failed to meet their promises to provide an insufficient $100bn a year in climate finance to the world’s most climate-vulnerable countries. And they refuse to make any concrete commitments to pay for mounting loss and damage, such as the floods in in Pakistan and the drought in the Horn of Africa in 2022.

Faced with the climate crisis and the signs of reaching dangerous planetary tipping points, there is an overriding imperative to prioritise climate action and international cooperation to protect those who will be most affected. Yet in 2022, an arms race is exacerbating the climate crisis and preventing its resolution. It could not come at a worse time. To tackle the biggest threat to human security, the climate emergency, we need all countries – NATO members as well as Permanent UN Security Council members Russia and China – to work together to prioritise climate over militarism. There is no secure nation without a climate-secure planet.

Download the full report here.
The executive summary is available in English, Spanish and Catalan.
Find out more at the TNI website.

Please share this report, and feel free to also use these social media graphics:

Open Letters to the UNFCCC & The Green... 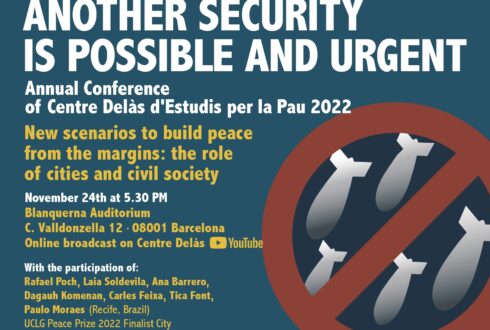 Conference: “Another security is possible and...