Webinar: Cancel RIMPAC – Time for a demilitarised and independent Pacific 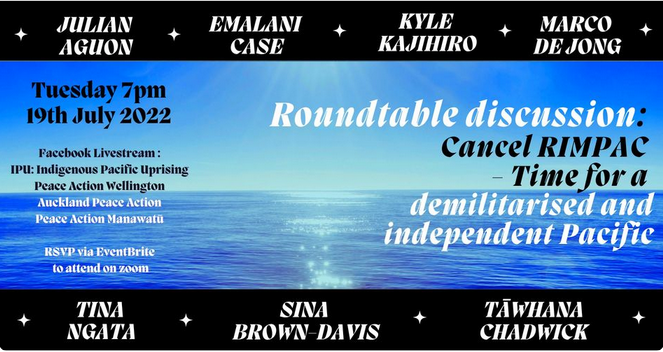 Join speakers from Aotearoa, Hawai’i and Guahan to discuss RIMPAC and the alternative – a free, independent, and demilitarised Pacific.
About this event:
RSVP for the zoom: https://www.eventbrite.com/…/cancel-rimpac-time-for-a…
Or watch in live on Facebook.
RIMPAC is happening now. It is a maritime warfare exercise based in and around Hawaiʻi used to demonstrate US domination and control of the Pacific Ocean. It happens every two years. It includes 20+ nations, 25,000 troops and thousands of weapons.
These military war games are an assault against Kānaka Maoli and other Pacific peoples whose lands and waters have long been used as sacrifice zones and whose lives have been dismissed and disregarded. Adding to RIMPAC’s impact is the fact that it is happening in a time of climate crisis.
The superpower scramble for influence is jeopardising peace in the Pacific. Polarising rhetoric, reactionary diplomacy, and wargames only prompt escalation. New Zealand must maintain principled distance and contribute to the alternative security vision held by other Pacific nations. This is centred on climate response, decolonisation, and socio-economic resilience .
Join speakers from Aotearoa and Hawaiʻi to discuss the the impact of RIMPAC and the necessity of the alternative – an independent and demilitarised Pacific.